The Fire in the Distance

An essay I wrote after the Boston Marathon Bombing

Losing Our Sages
Out of Iowa

Short Story from the Anthology Where We Find Ourslves: Jewish Women around the World Write about Home

Praise for Apples of the Earth
“...a marvelous first collection. In elegant luminous language Elenbogen evokes the places and people she loves and grieves over.”
--Lynne Sharon Schwartz

My poetry collection, Shore, is forthcoming from Glass Lyre Press, 2023

"First Fruit" "On Rising" "What We Can't Give Back" "Elegy: a Refusal" forthcoming in The Reform Jewish Quarterly, Fall 2020

"A Voice" is forthcoming in 100 Jewish Poems for the third Millenium ed. Matthew Silverman and Nancy Naomi Carlson 2020

"Sometimes Something Just Is and you have to give it a Name" Naugatuck River Review, Summer, 2019

"Writing the Fire in the Distamce" Brevity Blog May, 2020

"A Fire in the Distance"  Fury: Women's Lived Experience During the trump Era, Regal Books, March, 2020  Edited by Amy Roost and Alissa Hircshfield

Back at the absorption center in Ma'alot, Israel 2014 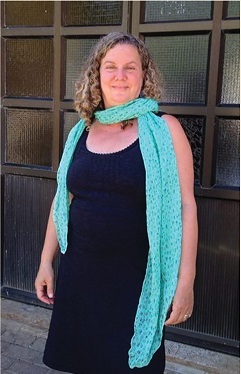 Dina Elenbogen, an award-winning poet and prose writer, is author of the poetry collection, Apples of the Earth (Spuyten Duyvil , NY 2005) and the memoir, Drawn from Water: An American Poet, an Ethiopian Family, an Israeli Story (BKMK Press, University of Missouri March, 2015.)

Her poetry has appeared in numerous anthologies and literary magazines including City of the Big Shoulders (University of Iowa, press), Brute Neighbors: Urban Nature Poetry, Prose, and photography

She received two fellowships in creative nonfiction from the Illinois Arts council, as well as a grant from the Evanston Arts Council. Excerpts of Drawn from Water have appeared in the anthology Lost on the Map of the World: Jewish-American Women's Quest for Home in Essays and Memoirs, 1890-present (Peter Lang Publishers) and the Jewish Women's Literary Annual.

Her fiction has appeared in the anthology, Nice Jewish Girls: Growing Up in America, (Penguin/Plume), Hadassah Magazine, Bellevue Literary Review, and the anthology Where We Find Ourselves (SUNY Press, 2009.)

Dina received a MFA in poetry from the Iowa Writer's Workshop, and a BA with honors in English and a certificate in Jewish studies from Indiana University.

She teaches creative writing at the University of Chicago Graham School where she received the 2012 excellence in teaching award and served as acting director in 2017. She gives poetry and prose readings, leads workshops and lectures at numerous venues including universities, libraries, and cultural centers.  Elenbogen consults individually with creative writers and students working on college essays.
Dina lives in Evanston Illinois with her husband Steve Siegel and their children Sarina and Ilan.